from the Sea Level Rise Foundation blog <http://sealevelrise.blogspot.com/> by Rolph Payet, president of the University of Seychelles —

From: The Independent (UK) 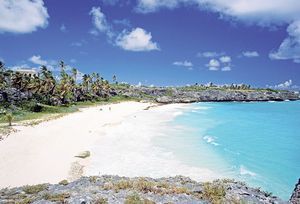 Rising sea levels caused by climate change are set to cause damage of billions of dollars to the islands states of the Caribbean by the middle of the century, including wiping out more than 300 premium tourist resorts, a remarkable new report suggested yesterday.

Airports, power plants, roads and agricultural land in low-lying areas, as well as prime tourist locations on islands from Bermuda to Barbados, and from St Kitts and Nevis to St Vincent and the Grenadines, will be all be lost or severely damaged, with dire implications for national economies and for the welfare of hundreds of thousands, perhaps millions, of people, according to the report.

Released yesterday at the UN climate conference in Cancun, Mexico, the report paints an astonishing picture of West Indies-wide devastation caused in the decades to come by rising seas. Sea levels mount in association with global warming because warming water expands in volume, and melting ice from land-based ice sheets and glaciers adds to the rise.

The report suggests that, just for the 15 mainly English-speaking Caribbean nations which make up the Caricom (Caribbean Community) regional grouping, the cost of the damage and necessary rebuilding caused by sea-level rise could by 2080 have reached a staggering $187bn (£120bn).

It suggests that, with a sea-level rise of one metre, which is now regarded as highly likely by the end of the century, the Caribbean would see “at least 149 multi-million dollar tourism resorts damaged or lost” and would also see loss or damage of 21 of the Caricom airports, and the inundation of land surrounding 35 of the region’s 44 ports.

With a two-metre sea-level rise, by no means impossible, there would be “at least 233 multi-million dollar tourism resorts lost” plus damage or loss of nine power plants, 31 airports, and the loss of 710km of roads. However, when a more sophisticated analysis was done on the impacts of erosion caused by rising seas, it was found that the damage leapt upwards, as one metre of sea level rise on low-lying coasts gives between 50 and 100 metres of erosion. A one-metre rise with erosion factored in would result in “at least 307 multi-million dollar tourism resorts damaged or lost,” the report says.

Commissioned by the United Nations Development Programme, the UK’s Department for International Development and the Organisation of Eastern Caribbean States, the report has been produced by Caribsave, a partnership between the Caribbean Community Climate Change Centre and the University of Oxford.

Led by Dr Murray Simpson, a senior research associate in the university’s Centre for the Environment, it is thought to be the most detailed study every made of the potential impacts across a whole region from rising seas, and is unusual in that it has been carried out not only by scientists but also by insurance experts, who have calculated the huge potential costs of the likely damage. Its findings were presented at an Oxford conference a fortnight ago to representatives of the Association of Small Island States (Aosis), the grouping of 43 island nations who feel themselves to be acutely at risk from climate change.

The findings cause alarm, and have helped to prompt a demand at the Cancun conference from the Aosis nations for a giant new insurance scheme, funded by developed countries, which would pay compensation for catastrophic loss to small states caused by sea-level rise and extreme climate-related events.

Leaders of the grouping spoke eloquently of the threat to them yesterday. “We are the most vulnerable countries in the world, although we pollute the least,” said Antonio Lima, Ambassador from the Cape Verde Islands to the UN.

Risks to the islands…

With a combination of sea-level rise and storm surge, 22 per cent of the population is at risk of flooding. Annual costs to the Bahamas GDP will predominately be tourism losses of between US$869m and $946m in 2050 and $2.2bn and US $2.6bn in 2080.

The impacts on Barbados are dominated by losses to tourism both through rebuilding costs and loss of amenities. Losses are projected to amount to between $283m and $368m in 2050.

Two per cent of land lost with one-metre sea level rise, five per cent with two metres; 12 per cent of population, and all airports, at risk from flooding, which threatens 50 per cent of resorts.