Notice of the Loss of Christopher Howell, Caribbean Environmental Analyst

As Judith Towle began to muster information and experts to write the Tortola Environmental Profile in the British Virgin Islands this past January, we realized that we were missing input from long-time Program Associate and an early (1975) intern for IRF, Dr. Chris Howell, Ph.D. It had been some time since we had heard from the peripatetic and good-humored Howell, who had led several foreign assistance consultancies for US and European groups to guide the development of sustainable tourism in marine and coastal areas in the Middle East. As a bachelor with a passport from the United Kingdom, Chris was especially valued as an expert who would take on assignments that others would decline.

We really wanted to track down Chris just to catch up, and to get his informed input on environmental issues and trends in the BVI. Many Virgin Islanders remember Chris from his on-island research for his 1978 Ph.D. thesis at the University of Florida on Tourism in Tortola, British Virgin Islands: Perceptions toward Land Carrying Capacity.

[Chris was …] one of a small group of fellow graduate students who, like myself, conducted fieldwork in the BVI/USVI during the late 1970s – Chris, James Lett, and Frank McGlynn here on Tortola, and Karen Olwig in the USVI. Chris was also a fellow-jazz aficionado…

Chris was smart, observant, and he had produced a masterful study in his thesis, which he updated by several subsequent consultancies in the Virgin Islands and the wider Eastern Caribbean area. About a decade ago Chris served a year as Island Resources Foundation’s operational coordinator in our office on Main Street in Road Town, where the photo below was taken in June, 2002. 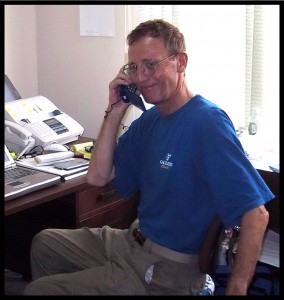 We were all shocked and saddened when Jean-Pierre Bacle’s research unearthed a short obituary from the Tallahassee Democrat that announced that on April 14th, 2011, Chris had passed on, after drowning in a kayaking accident on Lake Talquin, not far from his home in Quincy, Florida.

Mum Diz, brothers Bill and Steve, together with Australian family Jill, Broni, Tim, and Mike and Vietnamese family represented by Sunny and Viet, as well as his many friends in Florida and around the world are all proud to have been a part of Chris’ life and to have enjoyed the company of someone very special who shared immense love and joy with us.
A wake to honor Chris and to celebrate his life will be held with family and friends in the second half of May 2011 at a date and venue to be finalized.

It is ironic but perhaps fitting that his warm, gentle spirit is now at one with the Lake, where he recently found such tranquility and contentment living on its shores.

Published in Tallahassee Democrat on Apr. 28, 2011
– See more at: http://www.legacy.com/obituaries/tallahassee/obituary.aspx?pid=150613088#sthash.xCw2VGXR.dpuf

We know many of you join us in belatedly recognizing the loss we all have experienced with Chris’s passing.
Bruce Potter for Island Resources Foundation.